A long time ago, when I was still a boarding school girl locked away in the English suburb called Kent, lining up for a dozen of original glazed Krispy Kreme doughnuts at Harrods (before heading further to grab a box of Laduree…yes, I was a fat kid!) on the weekend used to be the highlight of my month.There’s something extra special about that warm freshly made doughnut that they gave out for free to those waiting in line that gave it an extra kick of deliciousness – so delicious, in fact, that me and 5 other friends would all line up together for the free yummy goodness despite getting just one box of doughnuts! (No wonder they are not doing that promotion in Thailand!)

Once I moved to the States, the excitement kinda wore out while the law of scarcity set it since these rings of carbs could be found at pretty much all gas stations. So needless to say that you would not find me amongst the excited patrons patiently waiting in the Disney Land-like line that meanders outside of Paragon. Somehow, Thailand’s weather just kills my desire for them completely. But since the line and the hype have died down a little, I have gotten a box or two for my family from time to time.

This morning, however, I happened to be at Paragon to get my new ID (drum rolls for no more yellow piece of  sketchy immigrant-like paper ID!!!) so I decided to finally embrace the hype and got myself a proper box of assorted Krispy Kreme doughnuts. To my dismay, they did not have my favorite whipped cream-filled flavor! So I ended up getting their cheesecake ones and some other flavors to try out.

So here’s what I think about each one: (Please keep in mind that these are just my personal opinions because despite being obsessed with all things desserts, I’m all about dark chocolate and salted caramels and not so much marshmallows and jellybeans – so my perception of sweetness might be a little skewed from the norm.)

The original – I adore the original when it’s freshly made. The melt in the mouth softness makes it my all time favorite doughnut; but since the first time I tried it, I thought the ones here are sweeter than the ones abroad. Maybe it’s the hot weather? 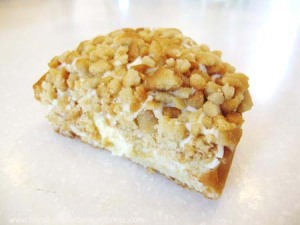 New York Cheesecake: I was excited for this one since NY cheesecake is one of my favorites. I was pretty sad to find it to taste not very “cream-cheesey” the cream cheese has more of an artificial lemon-like flavor.

Chocolate iced, Custard filled: I like that the chocolate is bitter, the custard is smooth, and that it’s not as sweet as the others.

Glazed Vanilla Cream Cake: Just like its name, it tastes like cake in doughnut form. It’s not as sweet as the original glazed and would be good with tea or coffee. 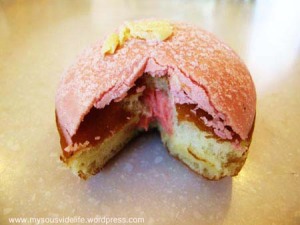 Pink Strawberry Cheesecake: Not a big fan of the artificial strawberry taste, although after chewing for a while it doesn’t taste as artificial.

Graham Krunch: Reminds me of pancake syrup. It’s actually pretty good despite being very sweet but a couple of bites are more than enough. Again it has the biscuit cracker topping, which would not be much better if it was not soggy and offer a diff texture.

White Chocolate with Cheese: I could see why many people would like this one. But for me, the sweetness of the white chocolate overpowers the cream cheese icing. It tasted more like doughnut topped with white chocolate to me. 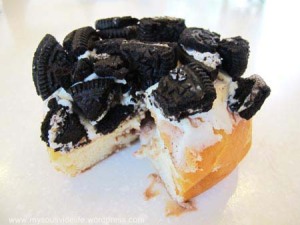 Cookies & Chocolate Cheesecake: Again, it has the artificial lemony “cream cheese” filling taste but I like this one better since the oreo and the chocolate tone down the sweetness when compared to NY cheesecake. 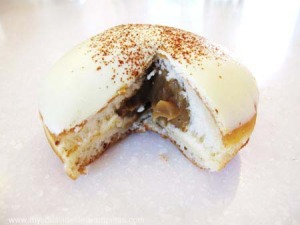 Cappuccino Franco: This one is my favorite out of the flavored-doughnuts. Since I find it to be the least artificial tasting, The coffee really tastes like coffee and I think it’d be perfect paired with a good old Americano! 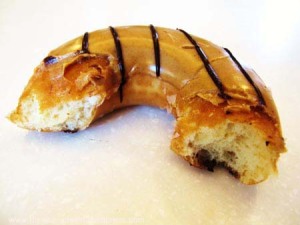 Peanut Butter Stripes: This one is my second favorite since I’m a nutter for peanut butter. So I was happy to find that it actually tastes like the real deal. The peanut taste rounds out the sweetness and gives the doughnut an old familiar comfort.