Last year, as I was frantically researching on restaurants in Europe to come up with my restaurant list for the trip, one of the restaurants that came up over and over again in numerous forums and food blogs as the number one recommended place to visit was L’Arpège. Although I ended up going to Pierre Gaggnaire instead, the curiosity to try Chef Alain Passard’s creations had never quite left my mind until I finally got to try his food yesterday,

L’Arpège has been awarded with the highest accolade of 3-michelin stars since 1996. But I think the hype surrounding the restaurant, or more so surrounding Chef Passard himself, started when he astonished the culinary master chef whorld by completely removing red meant from his menu and shifting the focus of L’Arpège towards vegetables – deemed a daring and bold move by many, now Chef Passard, known as the vegetable magician, has more than proven that his decision was a correct one.

Yesterday’s dinner was help at La Scala restaurant at The Sukhothai, interestingly it was my first time dining here despite having visited the hotels countless of times, the beautiful lush garden of the hotel is still as beautiful as I remembered 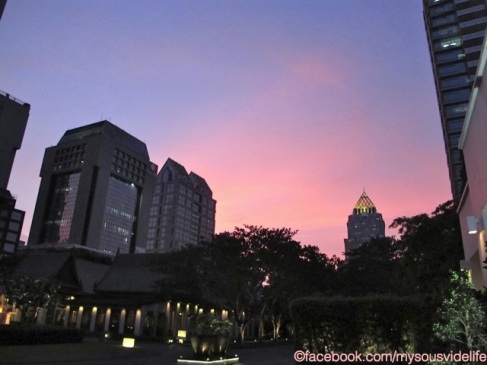 We were first greeted in front of the restaurant and walked to our table. As i walked into the restaurant I was rather happy to see an open kitchen – I love seeing Chef working their magic, it’s like watching a play for me. 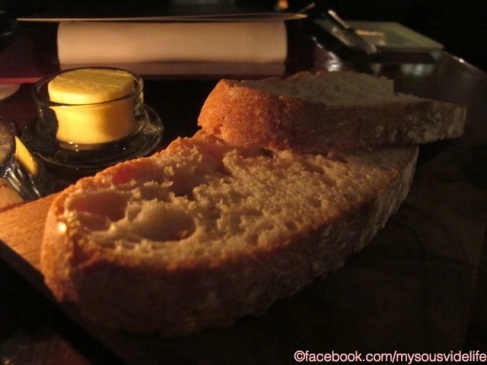 The bread looks to me like Pain de campagne, the rustic country style bread. But I am no bread expert, so do not quote me on that. The slightly sour taste of its thick hearty texture goes well with the cold creamy butter. 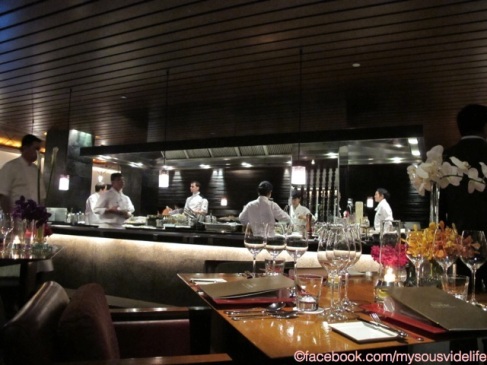 We opted from doing the wine pairing because I could not handle that much wine, by my fourth glass I would have lost all my ability to taste his lovely creations, and that’s the last thing I would want to happen. So we brought our own bottle of Ruinart Blanc de blac, Ruinart has always been one my my very favorites. It’s a shame that they are not readily available here in Thailand,

“Chuad Froid” of Organic egg from ferme de Bigottière poached in its delicate shell with Maple Syrup and Xeres Vinegar. This was probably one of my favorite dishes of this meal, although it did not quite beat my all time favorite egg dish the Truffled Egg by Thomas Keller at Per Se, this egg was still pretty darn good. I have never been a fan of borderline raw poached egg, I’ve always liked my egg leaning towards to cooked side. However, this egg was an exception! Despite being very runny, there was no “eggy” taste to it. All I got was a smooth velvety texture with a understated and complex sweetness from the maple syrup cut by tangy flavor and rounded together by the cream, one word – LOVE. 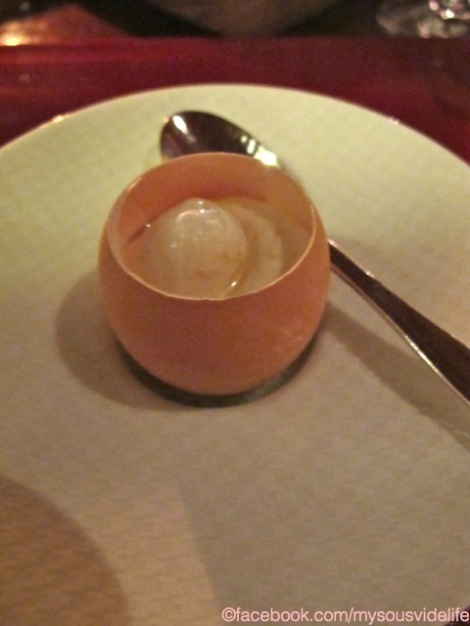 The next course is supposed to be lobster, but since I did not eat it I had a salad instead. The greens have a slight bitter taste that’s balanced by the nutty sweet flavor of the dressing. Overall this salad was a refreshing and light dish without having the sour taste every so apparent and associated with a salad dish, which i found to be interesting.

Lobster with a Sweet and Sour Dressing, Turnip and Rosemary

(I did not try this course) 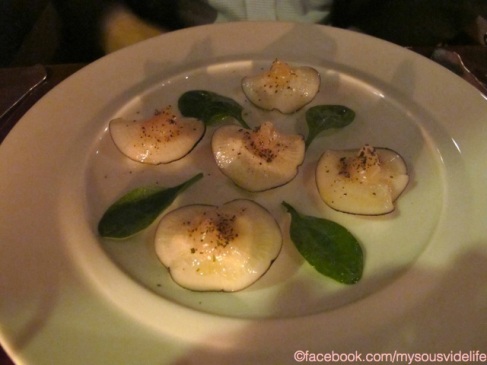 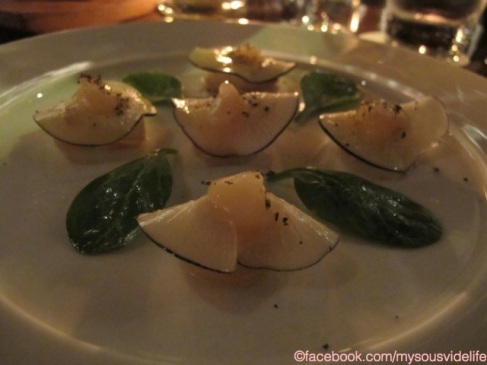 For the soup we had Pumpkin Velouté, Cashew Nut and Speck Chantilly, Since I skipped the lobster course, the waiter whom was very attentive misunderstood that I was vegetarian, so he kindly asked the kitchen to remove the speck ham espuma from my soup…..but I wanted my speck ham! Nonetheless, the soup was rich and creamy with a texture contrast given by the chopped cashew nut pieces. I enjoyed this dish a lot.

Another dilemma arises before my next course, as many of you may already know, I have a love-hate relationship with fish. SOmetimes I love it, but most of the times fish is not my cup of tea. However, after hearing the server raved about the monkfish, I decided to give in, hoped for the best, and gave the dish a try.

Apparently our table was lucky since we got the tail piece of the monkfish since it’s the most delicious with the smoothest texture out of the whole fish. The fish has a firmer texture that most other fish I’ve tried and is accompanied by a creamy and foam that, in my opinion was rather salt-heavy. 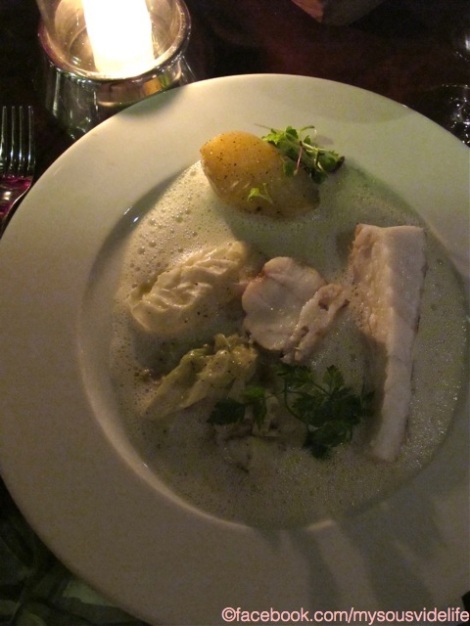 As we were enjoying our meal, Chef Alain Passard stopped by at our table and posed for a picture. I think I was the most (Michelin) Star(s) struck I’d ever been in my entire life.

The next dish was the one I had been the most excited to try since it is one of the dishes served at L’Arpege.

Arlequin of Vegetables and Fine Semolina with Argan Oil

An appropriately named dish since the bright colors of the vegetables and the medley of contrasting taste and texture are definitely fun and clown-like (Arlequin = clown.) Not only were the bright colors were pleasing to the eyes, the taste of this dish gave me a glimpse of Chef Passard’s genius ability to manipulate vegetables. The 12 vegetables repressing provinces from North to South of France each had their own stories, own textures, own taste, but blended so well together. I especially enjoyed the yellow beet, since it was my first time trying it. The medley of flavors are nicely tied together by the white onion and milk foam and the parsley and milk foam. An added touch of fun is added with the cous cous sprinkled on top of the dish. Overall, this was my favorite out of all the dishes. 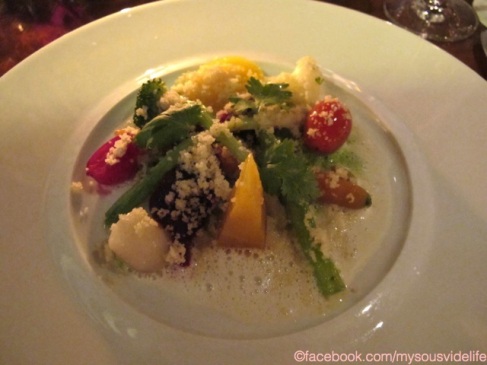 Following my favorite dish was my least favorite out of the night. The Challans Duck with Hibiscus and Orange Marc – another dish that’s from L’Arpege’s menu. Despite my excitement, the dish that I had was very salty. Although the sweet hibiscus sauce flavored with cinnamon, cardamom, and star anise helped to mask some of the taste of the sea-salt in some bites, I could not finish my dish. It left me wondering if it was just me that just happened to get a bad piece or not since some of the people who were dining at the same time seemed to enjoy this dish the most 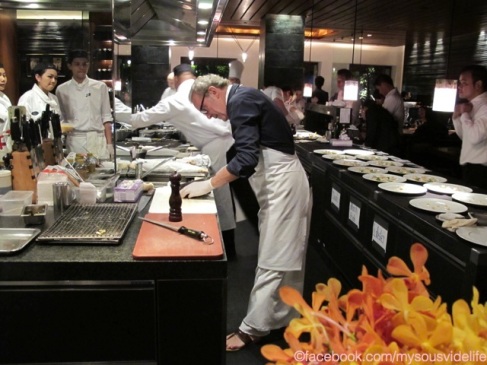 Another delicious dish. The color of this dish as your break through the caramelized shell is so visually stunning that I had to buzz out the flash on my camera to try to capture it. (Sorry, next table!) 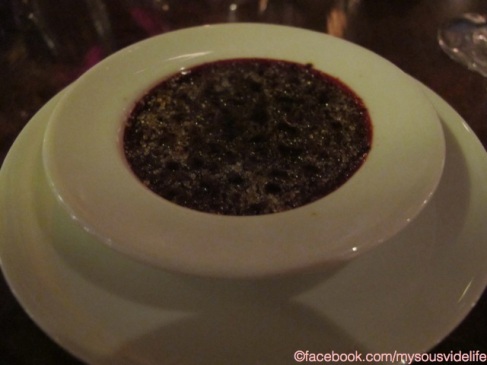 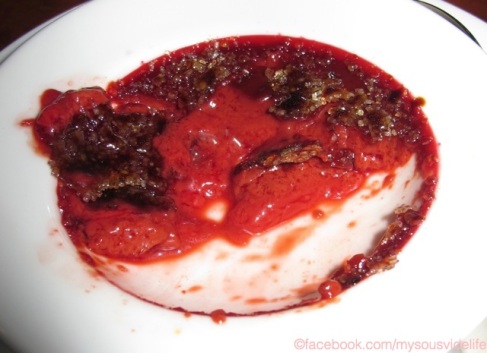 The last course is the Candied Tomatoes Stuffed with Twelve Flavors from oranges, apples, pineapples, and spices etc. The sweet tomato is accompany by a vanilla bean and lemon grass ice=cream. This dish interestingly reminded me of Christmas time probably from the candied fruit and spices that are ever-so associated with the holidays. 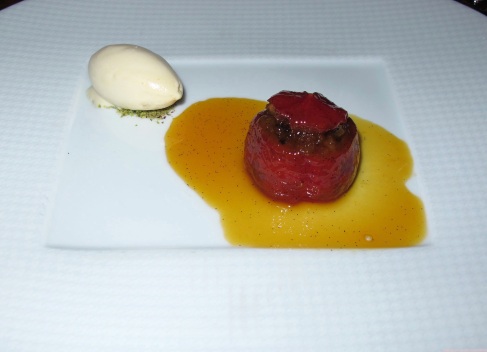 The Sukhothai Blended Coffee or Selection of Teas Mignardises

In order to sum up, I believe this meal left me even more curious about Alain Passard’s food. I believe that the meal was not a strong representation of his ability since there are still many dishes that I’ve read countless reviews and raves on that were not represented in last night’s meal. Despite having some problems with a couple of dishes, I thoroughly enjoyed myself. First off, getting that picture with him made the meal worth while in itself since I’ve been a curious follower of his for a while now. To top that off, my favorite part of the dinner was being able to see him cook so closely. Like I said in the beginning of this post, I enjoy seeing chefs at work the same way that I enjoy watching a good musical. But watching chef Passard at work is like watching a well directed musical starring Lea Salonga.