I am now back from Sakura-land to embrace the full blown Bangkok heat. As I already mentioned, I was in Japan for my annual birthday trip, and I have the strory from my birthday dinner to share with all of you today.

I am not a list maker nor am I a believer in Top 10 lists and ranks. I do not believe that Michelin stars necessarily translate to universal deliciousness since I do not believe such thing exists in the first place – what’s delicious to me might taste like &*%^ to others. I am more of a “see it for yourself” kinda person, and I would not say a restaurant is delicious simply because it boasts an endless list of accolades. So I bore some sketicism with me as I began my meal at Les Creations de Narisawa, a restaurant I’d been meaning to go to since my last trip to Japan, which was freshly rewarded with the acclaimed No.1 spot on the San Pelllegrino’s Asia’s Top 50 restaurants.

Normally, I spend my birtday dinner at the New York Grill at the Park Hyatt Hotel in Tokyo; I like the food there, and, above anything I am a sucker for beautiful cityscape -and I believe the New York Grill has one of the best views in the world.  However, this year I felt like I needed a change, I was turning 25 and wanted something new, something different to mark this mini milestone or what I actually refer to as the gateway age to oldness. I decided to go with Les Creations de Narisawa hoping to wow and gasp, and I I was not disappointed.

The meal at Narisawa changes seasonally, and I was there during their 10th anniversary so I got to try the star dishes from the past. The menu was titled

Spring menu 2013: Evolve with the Forest. It was, as expected, one of those cryptic menu with ambiguous names that explain nothing about the dish – even more so that Alinea’s since only the main ingredient is listed here. According to the website, this was Chef Narisawa’s intention to let our imagination runs free and interpret the dishes in our own way.

The first thing that arrived at our table was a lamp with a strage looking pale squidgy dough on top. Turns out this was “Forest 2010” bread of the forest, which was fresh bread dough proofing at our table!

Since I decided to do the wine pairing, the first of the 8 glasses of wine also arrived at this point – Toriivilla Cuvee Tradition 2008 It’s a smooth and light Japanese wine made from winter grapes. This wine is not even sold at the vineyard, as I was told by our sommelier (Mr.Yoshinobu Kimura, Director Sommelier)

Now it’s time for the first course, “Essence of the Forest.”

Essence of the Forest contains deep fried artichoke, water infused with Cedar and oak served in a shot, and, scattered on the wooden piece, were moses and soil made out of soy powder mixed with either green tea or black carbonized bamboo powder. This dish was recommended to be eaten by hands. This is one of the most beautifully presented plate of food I’ve seen, it was like a paiting of a walk in a Japanese forest in the early spring, I think the combination of taste, textures, colors is complex albeit the taste being very light. The only drawback of this dish was how hard it is to scoop up all the powder with your hand while looking lady-like – I failed miserably. 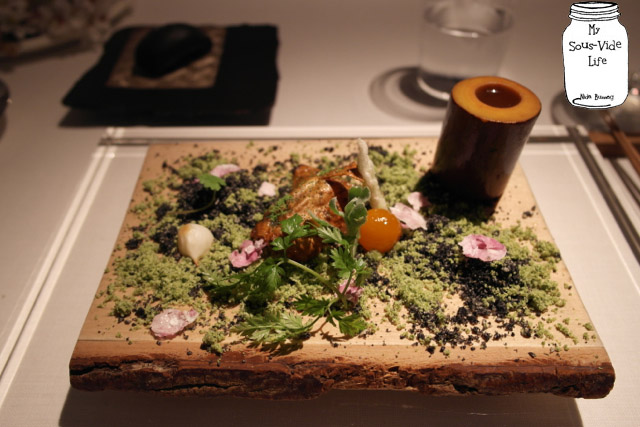 “Sumi” is our next course and it refers to a Japanese charcoal and is one of Chef Narisawa’s signature techniques. In this dish, the carbonized leek powder is made into a bread/ fritter with a juicy leek center for me and oyster for others. 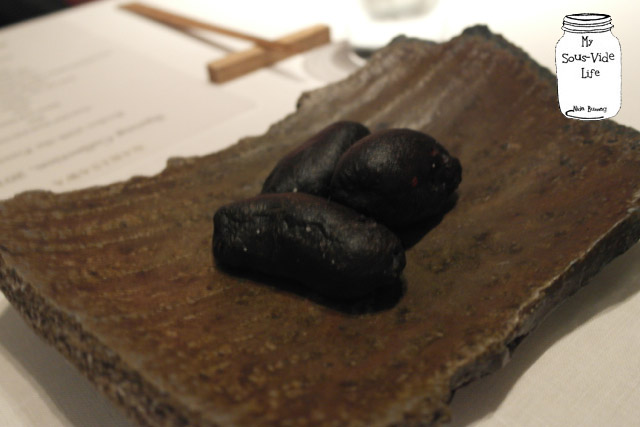 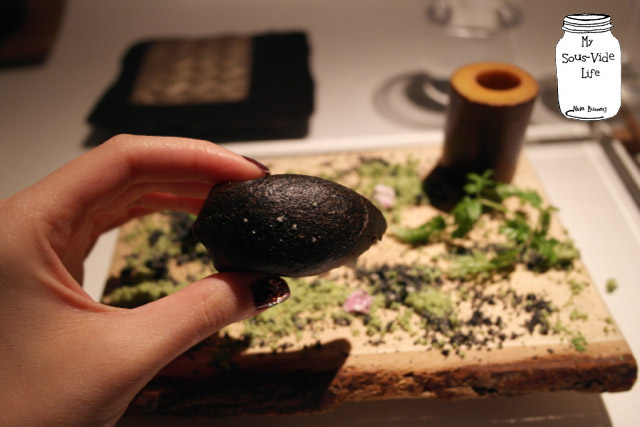 During this course, the pastry chef, who bakes all the bakes and desserts, then came out to bake the bread at our table side in a 300 degrees stone pot. 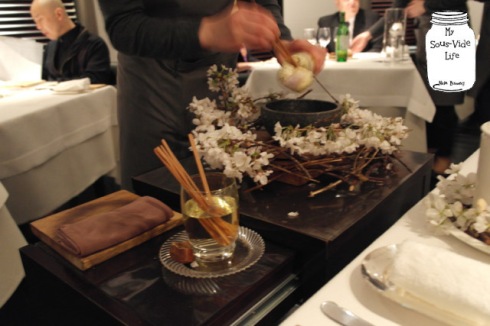 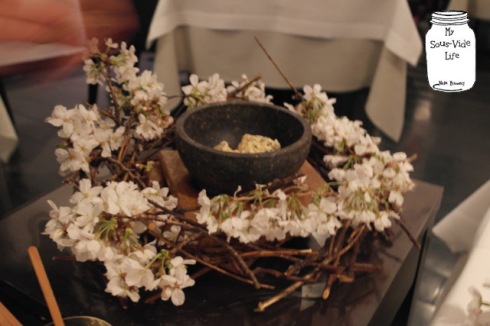 “Soil” one of my favorite dishes of the night in terms of the surprise factor.

The soup is made out of soil from Nakano prefecture. The soil has been carefully selected and examine under the microscope for a certain type of microbe that would produce the protein responsibles for “umami” taste. No other seasonings were added apart from the sweetness from burdoc root in a 1:1 ratio. I am not entirely sure about this, but I believe our server mentioned that due to the unique minerality of this soil, Chef Narisawa actually created the first Japanese terroir.

You really taste the “minerality” of the soil in this intense broth, which reminded me a little of truffle soup. It was really surprising, in a good way. 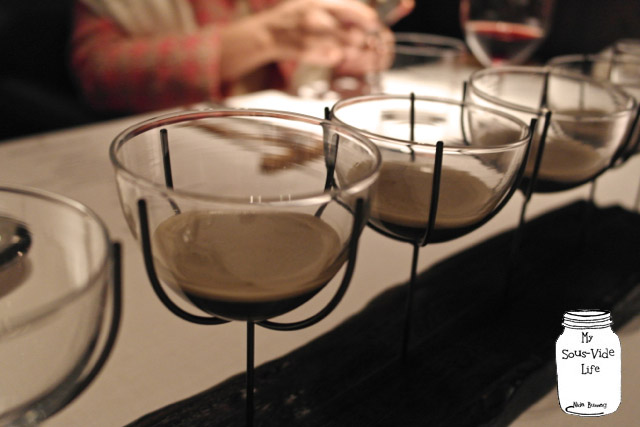 The wine to accompany this course was another wine served exclusively at Narisawa, it’s a pinot noir and gamay blend, vintage 96,  which I do not remember the name of, sorry!

During this course the bread was ready to be served.

The chestnut and citrus bread has a sweet taste and springy texture. The best part of this dish was “Moss” or the butter sprayed with green olive powder to achieve a moss-like effect – pure delicious genius!

Black and red bean bread and Japanese sour dough were also served at this point. 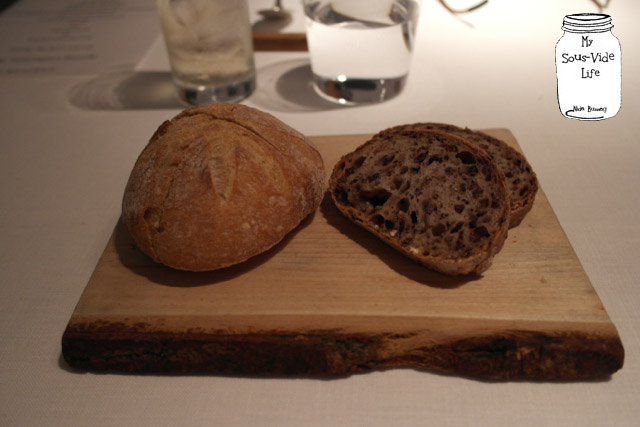 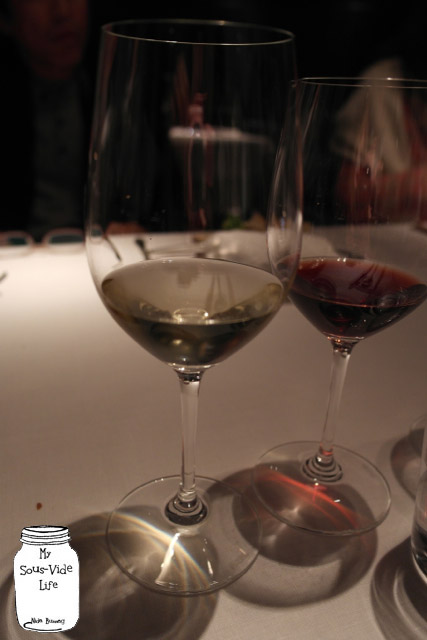 The next course is where things start to really differ between my non-seafood menu and the other’s. The traditional dish would be “Horse Crab, Noto, ishikawa, Satoyama, Satoumi.” Crab from ishikawa prefecture, sake gel, sautee artichoke, 7 types of pepper, topped with mountain herb. 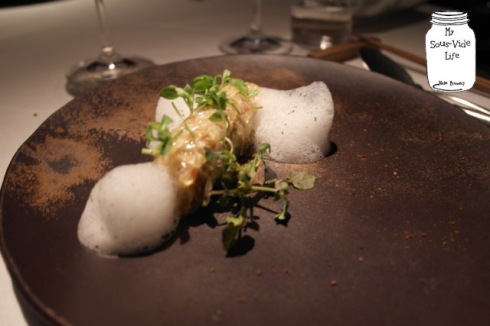 This course was paired with a Japanese riesling which I got to try and loved. It’s called Riesling Lion, Edel Wein, 2011. 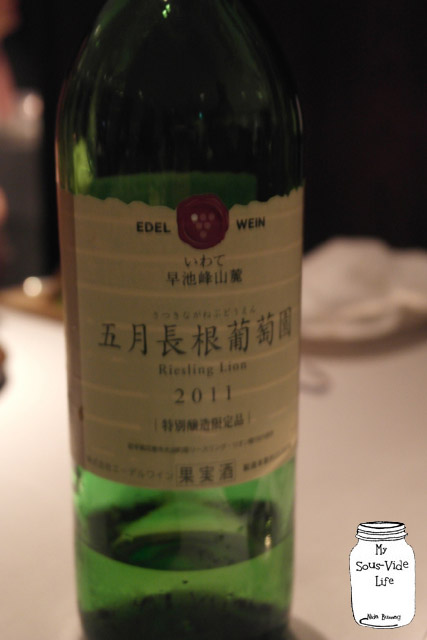 My course, on the other hand, was Green Asparagus, slightly cooked on a pan to retain it’s flavor and crunch, served with Japanese tomato and flower petal. This dish may seem too simple to some, but it was great for a vegetable freak like me (I did pay way too much money once to eat vegetables cooked by Alain Passard afterall…) The best part was actually the tomato, it was so deliciously fragrant and juicy! The wine pairing was Bergerie de L’Hortus Classique Blanc 2011 a fresh yet rather full bodied white with, which I believe was a blend of chardonnay with no oak.

The next traditional course was “Ash 2009” Scene of the Seashore

Olive oil, lemon juice, liquid nitrogen, and paprika. The concoction was mixed in a white fuming bowl at table side then pour over the grilled squid to create the “ash.”  The wine pairing for this course was Domaine Andre Vatan, Saint Francois, Sancerre 2009 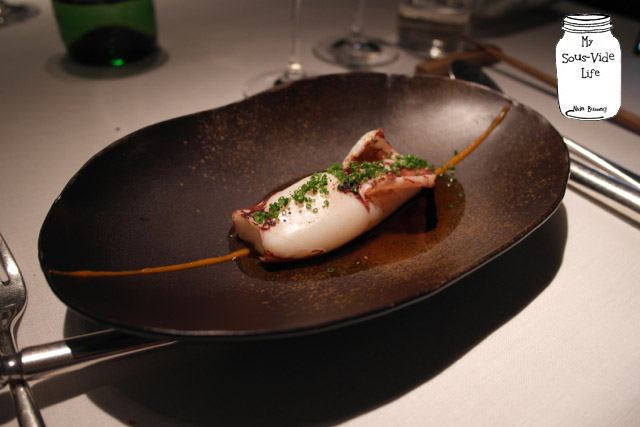 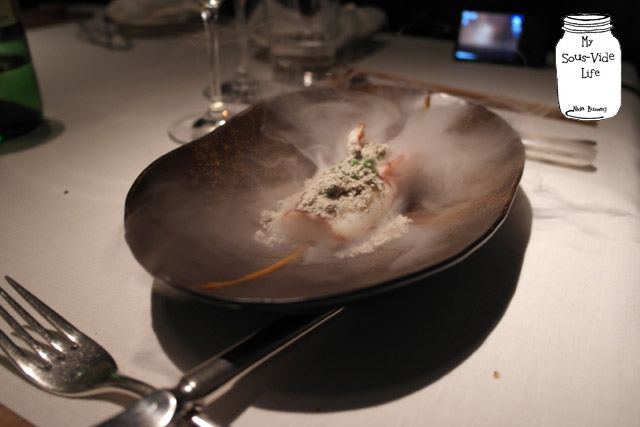 My dish was “Yorkshire Pork.” Japanese yorkshire crackling pork cooked in a peking duck style with crispy fatty skin. It is brushed with sweet cherry sauce. I have never been a lover of Chinese food, therefore this dish was very so so for me. Since the pork contains a high ratio of fat, it was too oily when cooked like a Peking Duck, which usually has a much thinner and more crispy skin.

The wine was again a Japanese wine from the same vineyard, this time it’s Toriivilla Imamura Cuvee Yuka 04 – an amber colored wine that helps to bring out the sweetness in the dish.

My course was again – asparagus. I was not epecting to get asparagus twice in one meal and wished for more variety. But  I guess they did give me a little variety since this time it’s White Asparagus topped with sabayon – needless to say it was delicious yet rather boring. Anything topped with a sauce that high in caloric content must be delicious, honestly. 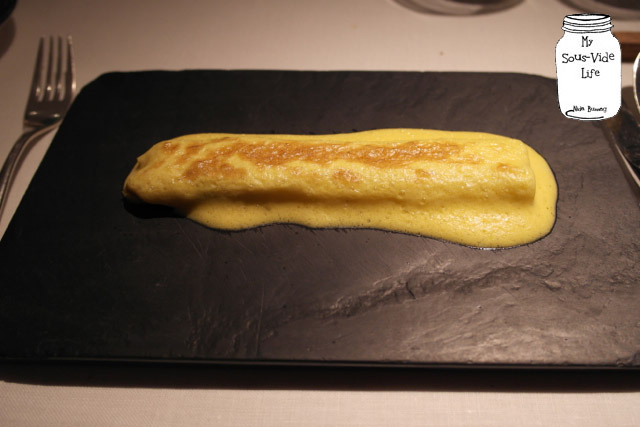 The next traditional course is “Mackerel, Hagi, yamaguchi, and Onion Essence, Amanohashidate” Spanish Mackerel was served infused in a glass dome with sakura smoke, and topped with grated yam, crispy lotus root, and onion. This dish is served with undiluted and unpasterized sake which is more powerful and has a higher alcoholic content. 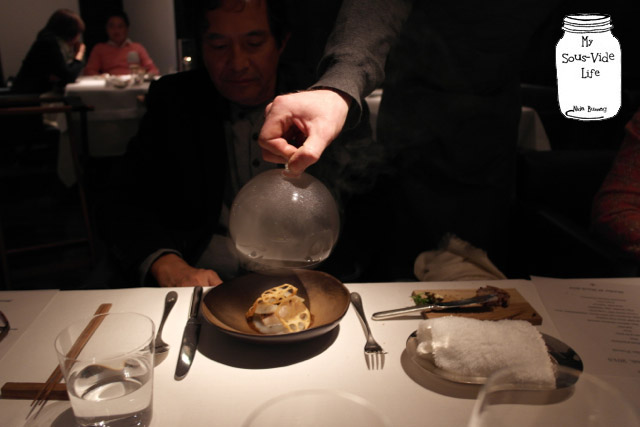 The wine was my favorite of the night – Trapet d’Alsace Riesling Beblenheim 2010. 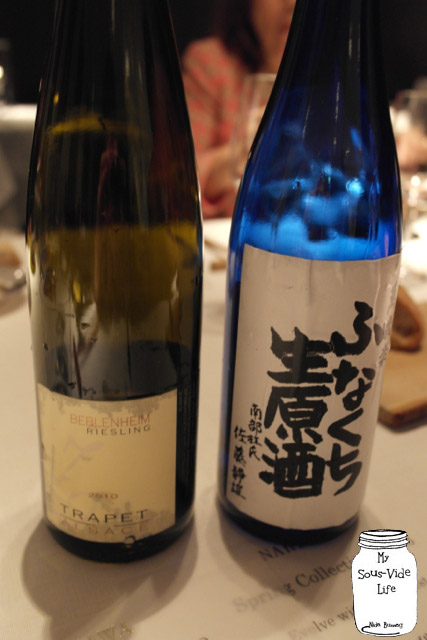 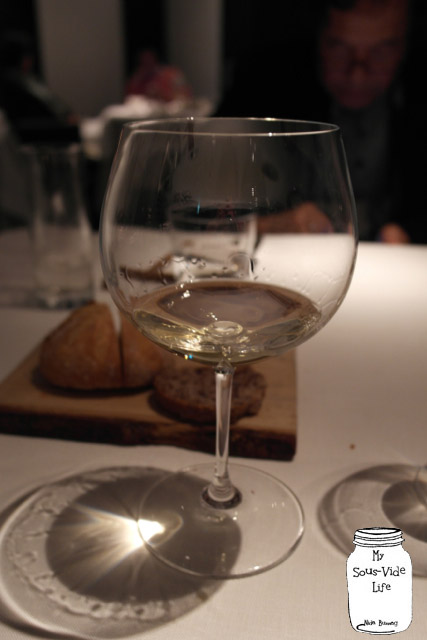 The next course was “Luxury Essence 2007” Langoustine. The luxury essence is made out of chicken and pork bone, stewing for 6 hours and is served in stunning tear drop-like crystal containers. 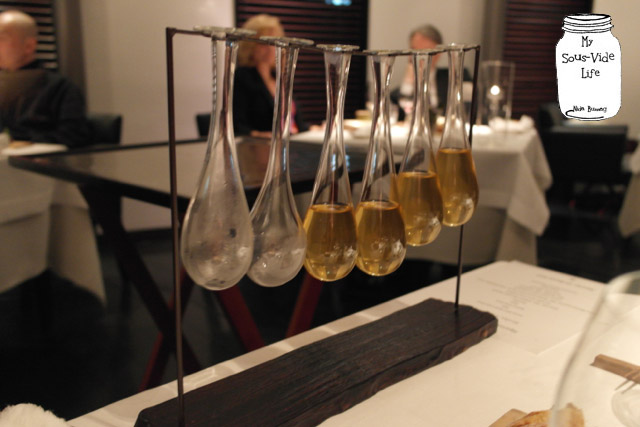 For the traditional menu, the essence is served on top of langoustine, where as in my case, it was served with pigeon. This course was so so for me. 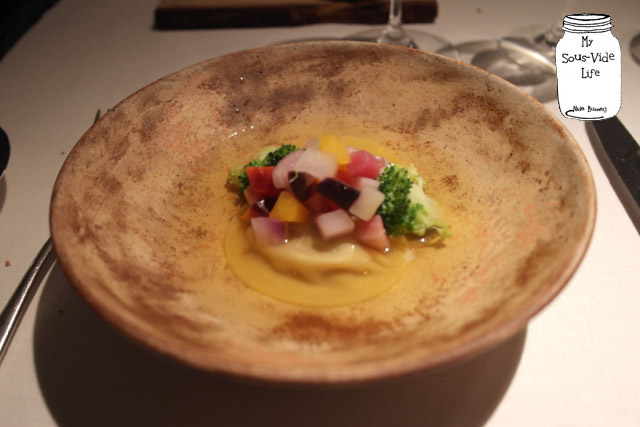 “Fugu, Blowfish, Hagi, Yamaguchi.” Deep fried blowfish is the star of this dish, and it’s served bone in with citrus and kinome sancho pepper leaf. This dish was recommended to be eaten by hand. I did not try this course but others said it had an interesting springy texture like that of a monk fish. 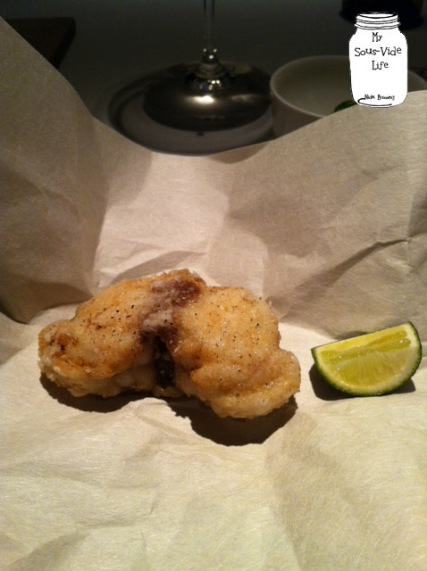 The next course for me was the “Barbary Duck” cooked by poring oil over it for 30 minutes to cook the skin while the inside remains pink. The dish is served with corriander, sancho, radish a la crème. The wine pairing for this course was Bourgongne Aligote, Emmanuel Rouget, 2000, which apparently has to be reserve 10 years in advance due to limited supply.

The next course is another sumi course – “Sumi 2009 Hida Beef”

– with wagyu from Hida area slowly cooked on low heat by pouring olive oil on top for 30 minutes. The beef is covered in sumi, which is charcoal powder made from leek this time. This dish was absolutely delicious, the beef was melt in your mouth tender with the right amount of smokiness from the sumi to cut through the fat. I loved it. The dish was accompanied by sake grantia, sautee onion, and red wine sauce thicken with kudzu powder, which is a type of Japanese starch.

The wine for this course was a red that I totally forgot to take a picture of or write down, but I remember that it was an 05…not useful at all, I know.

And, finally, my favorite part – desserts! First up, we have “Donguri Farm”

Donguri farm contains yuzu peel, epice cream, and chocolate while kuzumochi is a jelly-like squares are made of kuzuko or arrowroot, or as we call แป้งท้าวยายม่อม in Thai, topped with sakekasu or the sake lees, cream, strawberries, and liquid nitrogen. I enjoyed the latter dessert more than the chocolate one. 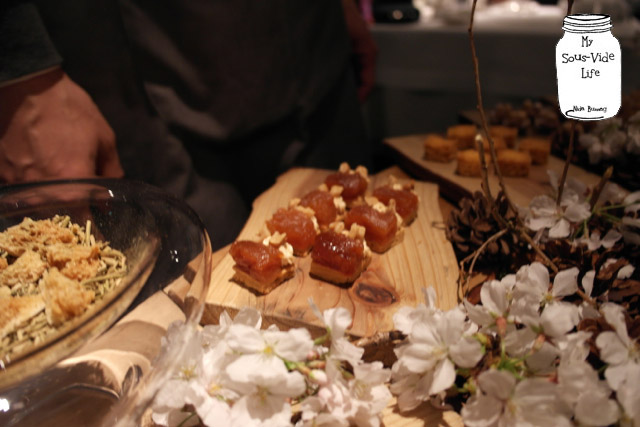 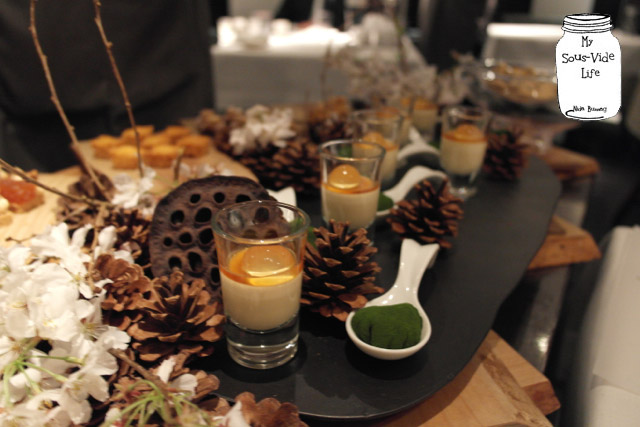 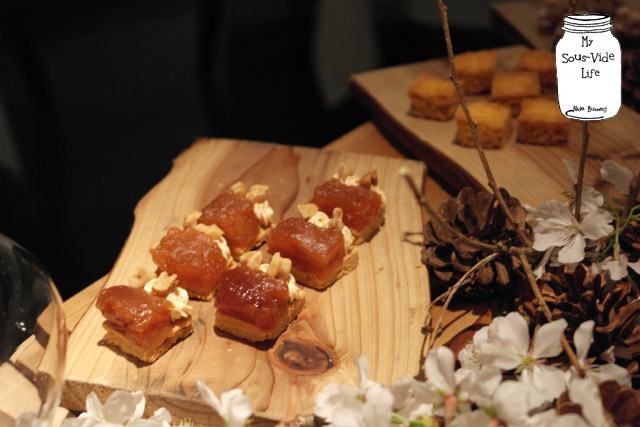 My favorite part of the desserts were the ombre mini macarons, the miniature mouthfuls were arranged in a crescendo of shade and flavors; they were delicious,  beautiful, and creative. 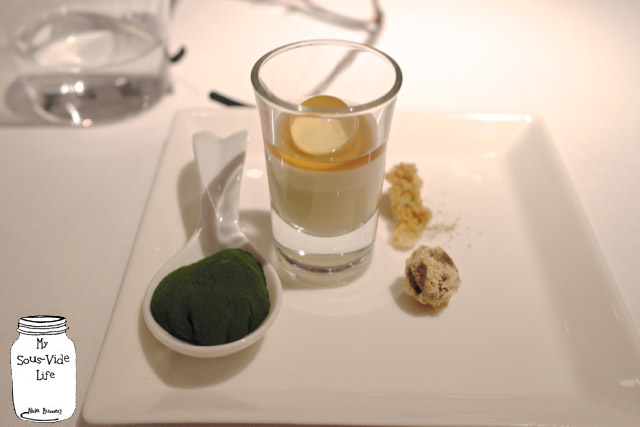 And last but not least, my birthday surprise – a white chocolate and cream cake that I took back to the hotel with me.

In conclusion, I truly had an amazing time at Narisawa in terms of the overall experience. I enjoyed the creativity behind the dishes, the presentation, the service very much, However, taste-wise, despite enjoying most of the dishes, the flavors were not really my style. I liked the taste of each dish but I would not go home and find myself craving for it in the middle of the night like I would for a truffle egg at “Per Se” or the gazpacho at “Frenchie.” The presentations did truly wow me though. The dishes were subtle and not theatrical like Alinea, but they spoke for themselves.  The designs of the plates & utensils were also superb, I was also excited to hear about the ingredients and the cooking method behind each course and really enjoyed chatting with the servers, despite some language barrier. The wine pairings were well thought through (in my humble opinion.) Overall, I would love to go back again one day but do not think it’s the “No.1 Restaurant” in Asia in my own little non-existent list.